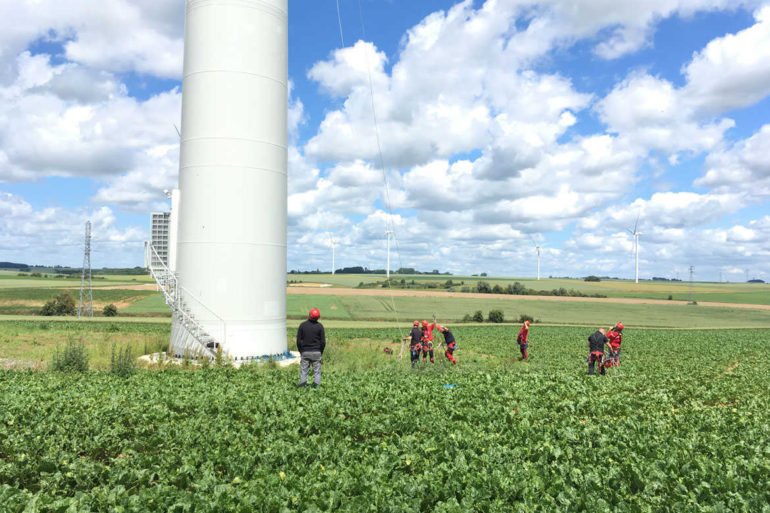 Intervention exercises on wind turbines with the SDIS 80

The SDIS 80 GRIMP at H2air for intervention exercises on our wind turbines.

The hazardous environment recognition and response group (GRIMP) from the SDIS of the Somme conducted response exercises on the Coquelicot 2 wind farm, which is operated by H2air GT.

H2air GT wished to make a wind turbine available for one day, so that the rescuers could train on one of the machines in the Coquelicot 2 park. These are Enercon-type wind turbines with a rotor of 82m in diameter and a nacelle at 78m height.

The day of June 20th proved ideal, with little wind and plenty of sunshine. Around twenty fire-fighters climbed the ladder to reach the nacelle.

The SDIS exercises on our wind farm:

See also: Continuous training in working at heights and evacuation

The objective is twofold:

Fire-fighters discover the site and practise on a wind turbine that is technically different from those of other manufacturers; for H2air GT, which ensures site safety, it is an opportunity to test the procedures in place, identify areas for improvement, and understand the difficulties and needs of the emergency services in the event of an intervention.

“Once or twice a month our group performs manoeuvres at height, but also at depth. It can be on a wind turbine, a large building and even on cliffs, but also in caves. After abseiling twice, we evacuate a stretcher horizontally, with a victim attached, and a rescuer directing the descent. ”